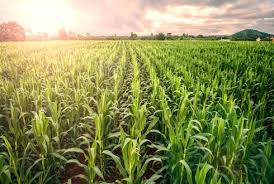 During the second half of the nineteenth century, the production of food and feed crops in the United States rose at an extraordinarily rapid rate. Corn production increased by four and a half times, hay by five times, oats and wheat by seven times. The most crucial factor behind this phenomenal upsurge in productivity was the widespread adoption of labor-saving machinery by northern farmers. By 1850 horse-drawn reaping machines that cut grain were being introduced into the major grain-growing regions of the country. Horse-powered threshing machines to separate the seeds from the plants were already in general use. However, it was the onset of the Civil War in 1861 that provided the great stimulus for the mechanization of northern agriculture. With much of the labor force inducted into the army and with grain prices on the rise, northern farmers rushed to avail themselves of the new labor-saving equipment. In 1860 there were approximately 80,000 reapers in the country; five years later there were 350,000. After the close of the war in 1865, machinery became ever more important in northern agriculture, and improved equipment was continually introduced. By 1880 a self-binding reaper had been perfected that not only cut the grain, but also gathered the stalks and bound them with twine. Threshing machines were also being improved and enlarged, and after 1870 they were increasingly powered by steam engines rather than by horses. Since steam-powered threshing machines were costly items — running from $ 1,000 to $4,000 — they were usually owned by custom thresher owners who then worked their way from farm to farm during the harvest season. “Combines” were also coming into use on the great wheat ranches in California and the Pacific Northwest. These ponderous machines — sometimes pulled by as many as 40 horses — reaped the grain, threshed it, and bagged it, all in one simultaneous operation. The adoption of labor-saving machinery had a profound effect upon the sale of agricultural operations in the northern states — allowing farmers to increase vastly their crop acreage. By the end of century, a farmer employing the new machinery could plant and harvest two and half times as much corn as a farmer had using hand methods 50 years before.